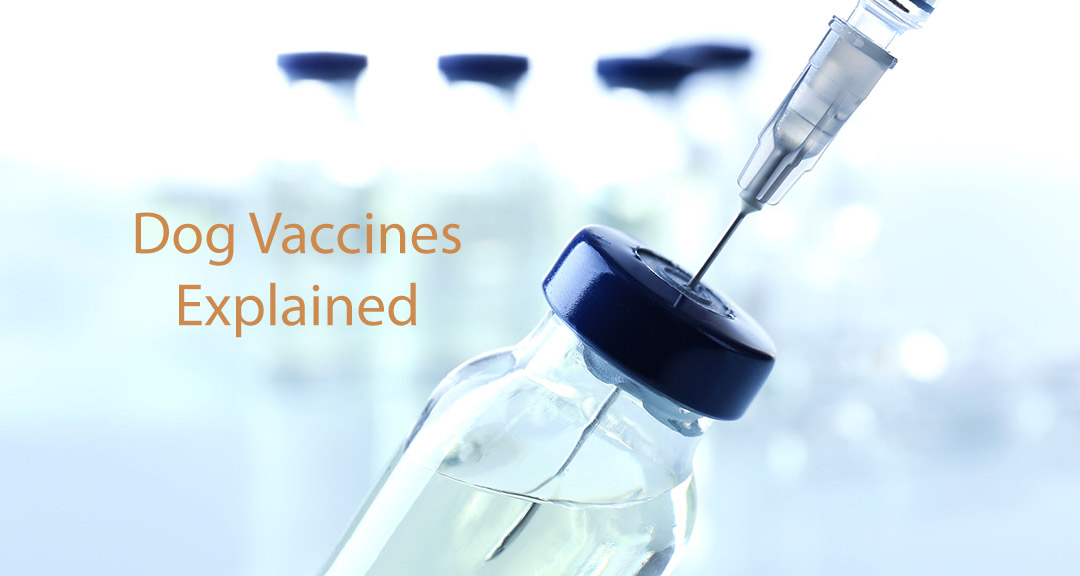 ‘What kind of vaccines do dogs need?’ and other vaccine-related questions answered here.

Why Do Puppies Need So Many Shots?

Great question- Your puppy was born with, and received some, antibodies (from colostrum or mother’s milk) that protect the puppy in the first few weeks of his or her life.  Over time, these antibodies are not as effective at protecting against disease.  To balance against the antibodies’ weakening ability to fight off infection, we administer vaccines at 6, 9, 12 with the last dose administered at 16 -weeks of age or older. The overall objective is to build your puppy’s own defenses against disease as the defenses that he inherited from his mother lose their strength.

How Do Vaccines Work?

The vaccines that we administer at Animal Medical basically take two forms: Killed and Live

In killed vaccines (variations include subunit and inactivated) the virus that we are trying to protect against is either killed or is reduced to its most telltale components.  When injected, the pet’s body can learn what it needs to protect against and create antibodies against the disease without risk of infection.

Critical components of the disease that we are trying to protect against are placed on the surface of a virus that poses no threat to your dog or cat (typically it is a virus that only infects birds).  You can think of it as a scary Halloween mask worn by an innocent individual.  Your pet’s immune system is tricked into believing that this innocent virus is really the bad guy and builds immunity against it.  Live viruses are considered to be superior to killed viruses when stimulating the immune system to produce antibodies.

I’ve never Heard of a Dog Getting Distemper, So Why Does My Dog Need a Vaccine Against It?

The reason you have never heard of any dog getting distemper is because millions of dogs receive the vaccine and are protected against the disease. In this case, the lack of prevalence isn’t a case against the vaccine but for it. When more than 75% of a population is vaccinated against a particular disease, the vaccine is successful at stopping epidemics, but if the number of those vaccinated drops lower than that, communities are at risk for dangerous outbreaks of disease.

It’s important to note that most pet owners believe in the value of both rabies and distemper vaccines, so it’s very rare that we see cases of either infection, but because pet owners have less confidence in newer vaccines like those that protect against Leptospirosis and Lyme disease, we see more cases.  The vaccines used at Animal Medical undergo a critical review by our veterinary peers and by our own medical team. They are very safe and effective.  You can choose to have them administered to your pet with confidence that they will safely and effectively protect against disease.

What Diseases Do Dog Vaccines Protect Against?

The distemper vaccine that we give at Animal Medical is really a combination vaccine that includes protection against 5 serious canine infections.  The letters of the vaccine DA2P-CPV represent each of these diseases.

Distemper is a serious infection with a high mortality rate.  Symptoms of distemper are severe and include diarrhea, fever, inappetence, vomiting and neurological issues.  It is highly contagious.  If they survive, dogs that are infected are often permanently neurologically damaged.

This virus causes infectious tracheobronchitis (infection of the bottom part of the throat and the top portion of the lungs). Adenovirus often works in association with parainfluenza and bordetella viruses to create a triple crown of infection known as Kennel Cough. Kennel Cough is a generic term for infection by one, two or three of the above-mentioned viruses.  Symptoms of the disease include a highly contagious, hacking cough and general malaise. This virus also cross-protects against an important form of viral hepatitis, a serious condition affecting susceptible dogs.

As mentioned above, parainfluenza is one of the causative agents of Kennel Cough, a highly infectious disease of the upper airways that causes a long-lasting, hacking cough.

Canine Parvo Virus is an extremely virulent, infectious agent that causes debilitating diarrhea, vomiting, inappetence, and overall sickness in dogs. Parvo commonly infects young dogs through the age of 3 and is especially pronounced in breeds like Rottweilers, Labradors,  Pit Bulls,  Springer Spaniels and German Shepherds.   There is no known cure for Parvo and the disease has a high mortality rate.

The rabies vaccine is required by law.  New York has a relatively high incidence of rabies compared to other states. In a study conducted from 1993-98, 16%  or 8,858 of all the animal submitted for testing were  positive for rabies and an astounding 18,238 New Yorkers were treated for post -exposure to rabid animals.  Rabies is transmitted to humans from the saliva of an infected animal.  Untreated Rabies carries a greater than 99% mortality rate. There is no known cure, but post exposure treatment, though expensive and painful, is effective if started soon after exposure to the virus.  Remember that any animal that doesn’t have proof of a current vaccine and that bites a human may be required to be euthanized and tested for rabies.

Leptospirosis is transmitted through the urine of many mammals including rats, mice, possums, skunks, pigs, cows, and horses   Any dog that goes outside is at risk for infection.  The disease is transmittable to humans and is considered to be highly infectious.  There are a wide range of symptoms associated with the disease but the organisms invade the kidneys and liver resulting in death if left untreated. Although treatable if caught in the early stages, it is often overlooked in the early stages of infection.

Kennel Cough is a generic term for infection of the upper respiratory tract by one or more of three organisms:  parainfluenza virus, adenovirus type 2, and Bordetella Bronchiseptica a bacteria related to the human pertussis (whooping cough) agent.   Patients sick with the disease are highly infectious and present with a deep chested, chronic cough.  Symptoms of the disease can last weeks and even months.  Kennel Cough vaccines (sometimes referred to as Bordetella vaccines) are required by all boarding facilities.  At Animal Medical you may see us administer this vaccine in your dog’s mouth, in its nose, or by way of an injection.

Influenza is a virus related to the human influenza organism responsible for causing respiratory signs leading to cough, malaise and pneumonia. It can look similar to “kennel cough” but carries a higher morbidity. Dogs at highest risk are those that frequently visit boarding and doggy day care facilities. Cats have rarely been infected. There are two strains (H3N2 and H3N8) currently of concern, both of which we vaccinate for at AMNC in at risk patients.