Rockland County is one of nine counties in the state in which Lyme Disease is considered endemic. Others include Westchester, Putnam, and Dutchess Counties. The Deer Tick (Ixodes scapularis), the insect responsible for this endemic, is abundant in these areas and frequently victimizes dogs and humans. Check out this map of the off-the-charts cases of Lyme Disease in New York and zip codes that our vet clinic serves 10954, 10956 and 10958 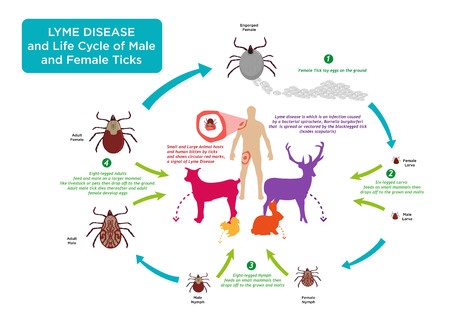 In addition to the Deer Tick, our county hosts the Black-Legged Tick capable of carrying Lyme Disease and Anaplasmosis and the American Dog Tick, responsible for Rocky Mountain spotted fever. Symptoms of this disease are much more severe and include stiffness in the joints and neurological abnormalities. The Brown Dog Tick is another species that can transmit Babesiosis and Ehrlichiosis, both of which have similar clinical signs. Lastly, the Lone Star Tick, a primary resident of southeastern and south-central United States, has slowly migrated north and can now be found in southern New England. This tick is capable of transmitting Ehrlichiosis and Rocky Mountain spotted fever.

At the very minimum dogs should be annually tested for tick borne diseases. If your pet is the unfortunate host to a tick, you can use the link above to identify it, however ticks that are fully attached may already have infected your pet with one of the aforementioned diseases. If you find a fully-attached tick on your pet, call us for information on when to test for tick-borne transmitted disease.

The next time you are at our practice, we’ll review a plan with you for dog and cat tick prevention. Ticks, and the diseases that they carry, can be brought into your home and transmitted to you and other members of your family, especially young children, so it’s especially important to be vigilant.