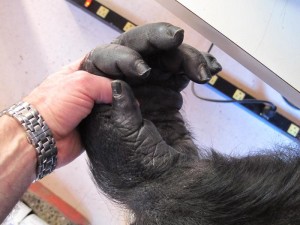 Dr. Gittelman recently collaborated with a team of physicians and veterinarians that helped remove a foreign body from Koko’s stomach.

Known for her ability to communicate with humans through sign language, Koko is already feeling much better and is seen here bonding with her new kitten, Tiger, who she named. Koko can also be seen holding Dr. Gittelman’s hand while under anesthesia.

“It was a fantastic honor,” says Gittelman. “I wrote a blog post on an endoscopic procedure I perfected at my veterinary practice, Animal Medical of New City, back in November and a few weeks later, someone close to the Koko healthcare team read it and made a recommendation to the Dr Penny Patterson, the director of the Gorilla Foundation her handler, that I might be a good candidate to join this surgical team.”


Koko had been suffering from weight loss and nausea for several weeks after she inadvertently ate a piece of plastic while playing. Gittelman adds, “they had tried twice before, unsuccessfully to remove what they knew to be a small, oddly shaped plastic ball from Koko’s stomach. The last attempt by this team was successful. It was incredibly gratifying.”


Dr. Patterson was committed to a non-surgical approach to solving Koko’s medical condition. A representative from an endoscopy instrument manufacturer was on-hand during the procedure, with specially designed “gorilla fortified” instruments, to aid in the removal of the foreign object. In under an hour the object was retrieved using a large wire snare passed through a flexible endoscopic camera and without the need for surgical intervention. The procedure was a huge success and Koko is showing improvement already.


Koko is housed at the Gorilla Foundation, a not-for-profit organization for the preservation of gorillas in the wild. For more on Koko, visit http://www.koko.org/index.php